Scene from a diner 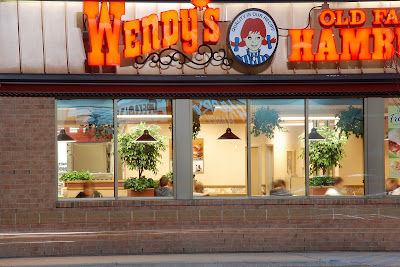 Last Sunday, I had some time to kill while the kids were attending an evening program. I could have driven home, but by the time I got there, I would have had about half an hour before getting back in the car to drive back. The eco-friendly angel on my left shoulder said I should save some carbon emissions by not making two trips. The photographer angel on my right shoulder said I should use the free time to take some pictures. They were both right, so pictures it would be. Since the sun was setting as I dropped the munchkins off, I took the tripod, too.

This is a 30-second exposure taken from across Adelaide Street. I was trying to get some long exposures of passing traffic (more in another entry) when I noticed the diner-ish glow coming from the Wendy's across the street. Although I do not, as a rule, shoot strangers' faces, I knew the long exposure and distance would render them unrecognizable. So I trained the lens on the restaurant windows and hoped that no one would look way across the four-lane road and notice the strange guy in a trench coat with a tripod-mounted camera.

I chickened out after only one exposure, but it seems to have been spot on. I like it because there are four mini-scenes going on in this one picture. I wonder what each person is thinking, feeling or saying. I wonder what brings four sets of strangers - alone or in groups - to a Wendy's at 8:25 on a Sunday night. I wonder how many other slices of everyday life go unnoticed because no one thinks they're worth capturing.

In the end, this picture reminds me that no matter how dark and bleak things are on one side of the street, there's always a friendly glow somewhere nearby that offers sanctuary. It's up to us to turn ourselves in the right direction.

Your turn: Do you have any scenes from a diner in your own personal storybook? If so, I'd be honored if you'd share one.

Quick technical comment: If you click on the image to enlarge it, you'll notice ghostly trails in front of the brick from at least one passing car. This is what I love about long exposure nighttime shooting: you never quite know what you're going to get (shades of Forrest Gump, actually.) And even if you preview it on the camera, the image really only comes alive once you've got it displayed on a full-sized screen back home. I love a good surprise.
Posted by carmilevy at 3/18/2007 09:53:00 PM

I didn't see it that way until you mentioned it. Four separate scenes. So much happening simultaneously, just like life. So cool.

I noticed a reflection of something that reads "Harry....".
Actually, your mind works very much like mine. When you wrote:
I wonder what each person is thinking, feeling or saying. I wonder what brings four sets of strangers - alone or in groups - to a Wendy's at 8:25 on a Sunday night. I wonder how many other slices of everyday life go unnoticed because no one thinks they're worth capturing.
That sounds exactly the way I think!
I notices little trails of light throughout the reflections as well. Nice photo!

I have a good memory of a diner.Back in 1969, when mr. kenju and I were thinking of moving to Raleigh, we came here to check it out. Arriving about 9:30pm, with a baby and a sleepy 3 year old, we found an old shiny diner downtown. It was cool (outside as hot), and people were warm and inviting and the food was substantial and tasty. It formed an image of this town in my mind that has never been changed - even though the population has grown considerably.

My Diner memory is of the Empire Diner in Chelsea, NYC (it features in the second MIB movie!) We traipsed the wet streets of Chelsea determined to find it and had a great meal there - plus so much coffee we we buzzing for the rest of the day! The attentive waitress topped up our cups after every sip!!
A gorgeous pic today Carmi :)

All I can say is that I really want an order of fries and a frosty to dip them in! Nice shot...I like all the dimensions.

It is making me miss home again Carmi! :)

I love that. Not a diner, but...my mother worked in a local drug store where everyone who was anyone ate their breakfast before going on to work. We lived just inside the city limits, so I was not eligible to ride the school bus. Every morning I would have to get up and go with her to work. I ate my breakfast there and then walked to school. Those are some of my favorite memories of growing up. Our town was small then. Everyone knew everybody else, and I felt very loved by all those folks who were my mother's patrons.

i do love that pic, each different window, a different story??? who really knows.
that techie stuff is way over my head, but yes, i did see that sort of stream effect.

Those diner patrons look like specters of brunches past!

What I find amazing is that the second person from the left BARELY moved in the entire exposure...he looks almost in focus. What a boring time he must have been having...or perhaps he was asleep?

Diner story: I have so many. My life has revolved around diners. In my "previous" life before marriage and children, I waitressed in many bars. And what happens after closing a bar down at 2:00 a.m.? You head for the nearest diner. There is nothing like diner food after spending a night waiting on tables, working hard for the tips that didn't always come. The food selection always depended on what cash I'd made from tips that night. But dessert was ALWAYS on the menu...there is something about "true" diners and their dessert. The atmosphere was always warm...and the night owls were out - a different crowd from what you'd see in the morning. All the suits and dress clothes, with newspapers and cups of coffee.

The night owls were unhurried, quiet, eating slowly, savoring what they had.

Lovd this picture as I often do with your artwork am here kinda late from Michele's I think ?

Thanks for the comment, and keep the pics coming.

You're making me hungry, Carmi. The Wendy's chain in central Illinois went broke about 2 weeks after we moved here... and we are missing Wendy's something fierce!

As for me and my diner scenes, I am the type who tends to eat watching others, their facial expressions and how their emotions play across the canvas. I can't say, however, that any one event sticks out in my mind other than my own personal memories of meals out and about with friends.

Nah, not at this moment in time - but there is a very large knife on my blog [big grin]

That's a cool picture, even if Wendy's is one of my least favourite places in the world.

I liked this pic, for the 4 scenes u mentioned. Let's u wonder about each frame, and person in them, make up stories about their lives, what brought them there etc.

My first job ever, was washing dishes in a small town diner where I grew up in the BC Rockines, I was 13 yrs old and up at 6am all summer to work morning shift. I actually liked the job and I was done at 12 noon...just in time for the town public swimming pool opened. It was bliss to dive in after a long morning in a hot steamy kitchen.

yes! We were traveling one of our two day travels, and stopped in a diner on the outskirts of California only to see our next door neighbors sitting at a table close to ours! What are the chances?

By the way, I like the movement in your picture. It shows life going on. A true, REAL moment in time!

i like the ghost car... alot. I want to do a photography course after seeing amazing photos by so many people including yourself. And then i can get a great big fat expensive camera and be a photo terrorist to my friends. Ha ha!

Ps - I also thought it was a cool pic simply because its on Adelaide St, and well funnily enough i live in Adelaide, South Australia. Coincidental? I think not. You planned it all along and I will lie to myself that you did anyway so dont change my mind :)

Stay your pleasant self, Carmi Chameleon. Stay snap happy and joyful about the wonderful things in your life - i just love to come and read your stories - fave so far - your bad night sleep on the floor with the dog while one of your beautiful boys was sick... that did make me chuckle.

All the best with the family!
Carola

hey - i read your post and enjoyed it and the photo. :)

mostly i wanted to stop over and say hello... i'm supermommy (lol) that cylithria wrote about in her blog. she tells me that you're a wonderful person, so i wanted to tip my hat your way and thank you for your kind comment on her site.

Horton Plaza in San Diego once had a cute old fashioned diner on the third level. Outside that diner was a red bench with a half wall behind it. I sat on that wall with my feet on the bench, Mr. Fun facing me. He kissed me long and soft. He then picked me up, triwled me around and whispered "you are my dream girl".
That was 12 years ago.

Great photo, Carmi. I love Wendy's to tell you the truth. Love their salads and baked potatoes.

Great text today too. I love watching people and wonder what has brought them together--or apart.

This is classic Carmi. So creative. I'll never look at my lunchtime Wendys again without thinking of you my online friend. That photo has such a welcoming glow to it.

A random thought: Carmi I would really enjoy seeing what you could do with the subject of timekeeping. Watches, clocks, sundials, whatever. I'll bet you would capture some classics. Ok, ok and while I'm indulging myself by blathering on about subjects I'd love to see you photograph....neon lights. Signs, diners you name it, I'd be facinated to see the Carmi spin on them.

If I wasn't so brain tired from the 10 and 12 hour days I've been working this week I would write you a short story for each of those four people in that Wendys :)

I expect you know this as well, which is the Bogart, Monroe, Dean version of the Hopper.