The family grows by one 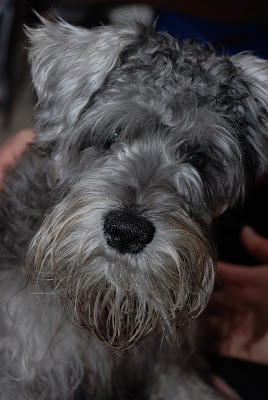 Because life isn't complex enough for us, we've adopted a dog. I've never had one, and we've been planning to get a dog for years, since our cat passed away. When we heard the story of this little dog's life, we decided we needed to add him to our family. He's an eight-month-old, Miniature Schnauzer, and his story is simple: the family that owned him wasn't able to give him the time that a puppy needs. He spent most of his time in the kitchen, with very little interaction with anyone else. When we met him last week, it was almost a given that he needed us almost as much as we needed him.

We brought him home tonight. Our youngest, who has always been petrified of dogs, now can't keep his hands off him. Our daughter said this is her dream came true. Our eldest son is adapting his daily routine down to the minute to ensure he doesn't miss out on so much as one walk around the block.

Sure, it's the honeymoon period for them. At some point, they'll start to complain about walking him in the rain, about getting out of bed to feed him, about keeping him from sniffing their feet while they try to eat supper. But those are issues for another day, and we'll get through them just as we have the initial transition: bit by bit, and as a family.

Welcome home, furry man. We've waited so long for you.

Awwww, what a sweet little guy. I'm so glad you all found each other!

We got the kids a shih-tzu pup 2+ years ago. Six months later, we got him a girlfriend (now THAT'S issane).

Yep, they are a ton of work and worry, but totally worth it.

Insane. Absolutely Not.
There is nothing like owning a dog, and rescuing one to boot.
He looks wonderful and in need of lots of walks and hopefully many times he'll be at the other end of your camera.

That face says, "give me love".

Yeah, you're crazy, but who could resist? Great picture!

I've got lots of time for pet lovers.

"Our daughter said this is her dream came true." ~ loved that line!

Congratulations. You're not insane. Having a pet is one of the best things for families. :)

Best of luck to you all!

Carmi that fuzzy fellow will become a full fledged member of the family. Before long you'll have a hard time thinking of the family without including him.

Oh he is gorgeous. One of my first successful photos that I shot in South Africa was of a Champion miniature sschnauzer, I must dig it out if I have it here on disk. They have such amazing personalities. He will definitely be a great addition to your family and I am sure he will accompany you on your photo excursions many times. Bear in mind you are talking to someone who has had as many as 21 horses because she wont part with them unless it it a guaranteed good home!!!!

Enjoy him, every family should have a family pet. He is very lucky to have found you.

I think his face says, "I will make people smile."

p.s. Resuce dogs are often the best dogs of all.

I don't think that you're insane and your dog has me wanting a dog even more.

he is sooo cute!
I think its awesome that you adopted a dog, there are so many animals that need homes and I am glad to see that your son is getting over his fear of dogs. I can't wait to read all the stories and see all the pictures!

Oh, you are NOT insane. What a treasure! I just can imagine all the love that he's going to receive in your household. Lucky pup! Lucky you!

OHHHHHH...he's adorable. And yeah, taking on a puppy requires a certain level of insanity, but to your children, he's priceless! They will always remember him as the dog they grew up with.

Awww congrats to you! My Yorkie is 12 and it's killing me that she's getting so old and starting to show signs of age. I look forward to more great stories and pictures of your newest addition and adventures. ;)

Awww, he's precious! Yes, dogs are a lot of work, but they bring so much to a family. We have one (his sister died last year), and I can't imagine a home without a dog. Congratulations on your new addition!

Take me home, please....What a sweet face. Your kids will grow because of him.

He is just adorable!

Not insane at all! But this is coming from a family with a Great Dane puppy! (now THAT's insane :-)
I can't be without an animal in the family - they just add so much so my soul somehow.

Congrats on your new addition!

What a precious story..my blog has oics of our addition from last year...thats a cutie

Oh, how adorable! Congrats on the new addition! Totally looking forward to more photos of him.

Cute dog. I grew up with a miniature schnauzer and they are wonderful. What a great pal for your kids! I look forward to the many photo shoots with Frasier. Already he is so photogenic!

And thanks for keeping me busy looking at your photos while John is away! I look forward to it!

OMG, who couldn't love that face! How could anyone have left him in a kitchen?

He'll bring so much joy and company to your lives that you'll wonder how you ever lived without him!

What a cutie!!!! Definitely an irresistable face!! :o) I am sure he and all your family will be very happy :o)

The perfect kind of pal!

You should try the VisualDNA, Carmi, its great. But then, you always give us fantastic visuals of your day to day life! I always love coming here to see what magic you can find in the mundane!! Have a fantastic middle of the week!

Yes, maybe you are insane. Dogs are too much work for me. That's why I have 2 cats.

I'm sure he'll feel like part of the family in no time.

To walk away from him would have been insane! As a huge dog lover and dog mom to 2, I say "Welcome to our world, fellow canine lover!" And just look at his little face, those quizzical little eyes, and that blackberry shaped nose... :)

Eh, you're only mildly insane. :) With a troop of three kids, you're bound to not regret the day you brought him home.

Congrats on the new addition!

his face tells me that he needs LOTS of love, and you're just the family to give it. How ADORABLE! Welcome to the Levy family, Frasier!

Every amily with kids should go through the dog phase once. And the hamster phae and the goldfish phase and all that. I love that you have given him your family name as well.

I'm so jealous.
Are you at all interested in an asthmatic, depressed cat going through a bout of diarrhea?

Two words, if it's available in Canada: Pet insurance.

You are not insane just a little confused lol, just kidding. You will have wonderful and not so wonderful memories of this dog. You did a good thing

What an adorable dog! I'm so happy for you. I think children should have pets..when possible. I love cats but I prefer dogs, they need more care which can be considered bad but I think it's good for children to learn.
They add so much to a home and it's so much fun to discover their individual personality. We have 2 dogs and they are both such a joy. They are always cuddled close to eachother but very different personalities...it laughable. Good luck, he is a lucky dog...I look forward to seeing more photos of your new family member.

Lucky you! I'm still working on convincing Hubby that we NEED a dog. He would rather have dental surgery...

Congratulations on the new pup!

He will provide a lot of "in-between moments" (in reference to your previous post) that will become cherished memories for the whole family. His habits will become fodder for family conversation that will bring laughs and tears... it will be wonderful!

Are you having any problems posting pictures?

Oh what a great little fuzzy head! I want a pet again.

As the owner of three cats and medium size mixed-breed dog, who am I to judge your sanity :)? I will say that the dog is more work than the three cats combined (boy, can I relate to the "walking him in the rain" part -- my back yard is a huge mud pit at the moment and two inches of rain are expected overnight, oh joy!), but when that furry head rests in your lap and those big brown eyes look up at you all adoring, well, there ya go. Blessings to you and your new furry friend.

Frasier is beauitiful!! There will definately be an adjustment period, but after that.......you won't remember what it was like without him.

My family is heading down the doggie insanity road too this spring......another Lab to keep our 4 year old company, and to upset the apple cart once again!

Insane? No. Definitely no. Your kids will all learn more about unconditional love and loyalty, than you could teach in years. Those eyes and those paws and that warm little body sitting next to them when they are hurting will do wonders for little broken spirits when someone has been unkind or when they feel cranky. Frasier is adorable. Enjoy. I'm sure he will be loved and will be ever so grateful... rescued dogs are always the most appreciative and the most lovable.

that face says thanks for taking me home!
it's been over a year with our new one and my kids still play and walk with her all the time, sometimes they need to be reminded in the cold, but they understand the importance of it.
congrats!

There's nothing insane about spreading unconditional love. I'm sure your family will soon be weaving stories with the new edition that will last forever.

Thanks for the lovely comment on our blog. How inspiring! I'm so happy for your and your family, and can't wait to meet more about Frasier's adventures! (Great name, too!)

If you wouldn't mind, we are currently trying to win a $10,000 grant from SixDegrees.org, see our blog for details, and the best thing you can do is pass that information on to as many people as possible. Thanks, and thanks for saving Frasier!

Frasier! Great name. :)
He's going to bring so much joy, no doubts.

What a cutie patootie!

A real sweetheart... he's a keeper.

NOW I know how I missed this new addition to your family...I was in Paris when you got him.
He is ABSOLUTELY adorable! I think you know what a huge dog lover I am. So are you insane? Never! Your life will change a lot with a dog....all in good ways. I've had dogs all my life and can't imagine not having at least one.
That face said to me, "Love me. And you will be amazed at the love I give to you in return."
So welcome, Fraiser!