Alone in the airport 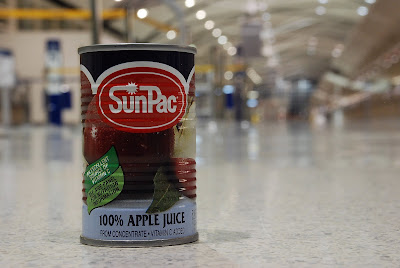 On my way to San Francisco, I had a 6-and-a-half hour layover in the Detroit airport. If you have to be stuck in an airport somewhere, this place in the middle of the night isn't a half-bad piece of real estate. The terminal is mostly new and fairly state-of-the-art. There are two main concourses connected by a funky tunnel that runs underneath the tarmac between the gates. It's huge, clean, bright, and for much of the time I was there, as quiet as a mausoleum.

So I found a spot at the end of one of the massive halls and tried to catch some sleep in a chair. Note to airport designers: if you're not going to add cots or lounges, the least you could do is install chairs that make it easy to recline and nap. End whining.

After an hour, I realized that the sleep thing wasn't going to pan out. My sense of logic was telling me that falling asleep in the middle of a strange place in Detroit wasn't the smartest thing to do when I was carrying enough technology to start my own research lab.

So I started to wander and shoot. I'll post a few scenes from the airport in the days to come, but I wanted to kickstart the festivities with this image. It exemplifies how I was feeling at 3:31 a.m. I was thirsty, but not so thirsty that I couldn't first plunk my juice can down on the pristine and deserted floor, get right down on the floor next to it and take a print ad-worthy shot. I thought it would stand out from the usual kind of travel pictures. Or maybe I was so tired then that I wasn't thinking much at all (no jokes, Mom. I'm being self-deprecating here.)

Either way, this picture works for me. Until the SunPac people call me and ask me to take it down because it represents a misuse of their intellectual property.

And if they do, I'm switching to another brand. Watch me.

I love your perspective on life in general.
If I haven't already told you, just reading your profile reminds me of me. Just take a look at mine sometime (you will see it too....)
I will think about the next photo and come back.
This is a very interesting view, plus I like apple juice as well.

An ice cream sundae on top of a Belgin waffle (yummers!) could be an interesting shot, course now all I'm thinking about having one myself, thanks a lot Carmi ;)

detroit, hmmmmm, not sure what they are famous for, food wise. they must have coffee there, how about some java shots?

I was laughing all the way through this Carmi. SO ME! :)

Great shot as well. I have never seen those SunPac cans until I saw another blogger shoot them. I love the way they look....a bit vintage I think.

My husband needs to read this post to get some ideas. He'll be stranded in an airport tomorrow night as he comes back home, finally. When he goes next month, maybe he should take his camera.

Well, if you were in Detroit... perhaps some "soul food"... or that bright red carton of a Big Mac and a milkshake.. but only if on the floor of the airport.

I can just see the commercial now....

It could be a brand new advertising campaign - and another string to your bow :-)

Next - there would HAVE to be a Starbucks there, yeah? They get everywhere.....so, did you get the whole cappucino thing with the whipped cream and everything?

It's an excellent source of vitamin C. I wonder how crowded concourse is at 3:15 P.M.?


I chuckled a little to myself when I saw this picture.

I took one similar to it several weeks ago...you can see it here: http://coreybienert.blogspot.com/2007/02/27-of-february.html

In a wierd way I also wouldnt mind being stranded in a terminal like you were. If it's anything like the Tom Hanks movie I would be thrilled :)

Hi Carmi, overnight at the airport.... am looking forward to your other photos..love the packaging of this juice.
Surely there would be no other time you could reasonably lie down on that floor to take a picture like this :)

Too bad planes can't run off of apple juice, lol!

baked potato sprinkled with black pepper & butter melting through it. Can you capture the steam spiraling from it Carmi?

That juice looks lonely!
Try shooting scrambled eggs for me!

I have slept at the Detroit Airport. I know what you mean about the chairs -- but there is a sweet spot -- right before you get to the new-agey tunnels with the lights and music, where there are these black modular chair things that you can push together and make a complete bed. I slept pretty hard. This would have been a great photo.

A cool photo would be to see expresso as it is being made.
The drip/stream of the expresso running into a shot glass!
(A few years ago, I worked a second job ~ in a bookstore. I would also work in the coffee shop as a Barista).
If you cannot get a shot of the expresso being made, maybe a top-down shot of a latte' as a finished product.
;)

Hey Carmi... I am starting to think you do more travel than I do. Don't forget to send me the dates for Shanghai, too!

I know the feeling about airport seats, but in APAC you'll find more seats for knocking back. In the Mumbai airport they have full recliners!

love the threat to SunPac. I often am like that about stores....like don't make me mad, there is a Target just up the road!!

6 hours in Detroit? I'm sorry, but you're right, the airport is nice, but no airport is that nice.

I enjoy your photos.

Great pic Carmi. How about a chocolate shot next?

LOL Great post Carmi! Hope you made it to San Francisco safely! Great perspecitve in todays shot! Looks like there is a lot of fun to be head in an airport stopover!:o)

Soup...Chicken Noodle Soup in a big tureen! That's what I'd want in the middle of a terminal at night!

I like the Detroit airport. Have some interesting memories of being stuck there.

And save it as a GIF, instead of your usual JPEG. I assume the mnemonic recursion isn't lost on you.

Like the shot and love that you would take the shot.

Hey Carmi...long time no see. As you might, or might not, know I've just recently returned from Paris and am slowly returning to the blog world.
Is it possible you have any French wine in your cache?
I'll be catching up with your photos and commentary over time. Best to you.....