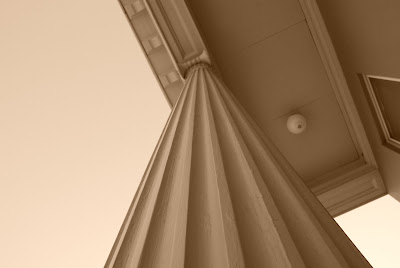 Look up, waaay up
London, Ontario, February 2007 [Click to enlarge]

Back in December, I took this picture of architectural columns. As I returned to the scene of that photographic crime, I thought of different ways of looking at a topic I'd already captured. (Carmi's photographic philosophy, part 8: you can take pictures of things you've photographed previously. The challenge lies in finding different ways to see the familiar. End digression.)

In keeping with my lifelong habit of looking up when I really should be looking ahead, I thought a view from the base of the column might be in order. As I composed the image, trying to ignore the growing sense of nauseating vertigo as I imagined what the two-dimensional image would look like, I thought about what it must have been like for the craftspeople who built this thing in the first place.

It would been built around the turn of the 20th century, right around when my late grandfather was born. No huge cranes or massive bulldozers. Just a bunch of skilled men with the gift of turning an architect's vision into large-scale art. I suspect my grandfather would have found it cool to watch them build this creation from scratch. He would have also found it cool that I'd be thinking something similar so many years later.

Suddenly, I felt really small as I tried to reflect the wonder of these century-old creations, and the fact that I got to look at history from a strange and unusual perspective.

Carmi, what a wonderful image and I really like the angle and the way you've taken this.

I was just on Anna's blog and saw your comment about doors. I think that there's an old area near the university in London where there are some magnificent doors. You should go there. I love doors too but this area of Guelph is so new.

Maybe the university will have some old ones.

It does make me feel small and a bit vertigoish.....why? hmmmm, your photo feels like I'm there in person, which conjures up personal memory images I have of looking at similar structures.

It does make me feel small; quite insignificant too, in the grand scheme of things!

I always feel small looking up at things like this. And when I'm in a church or other very large very old building I always find myself trying to picture them building it _ the most incredible feat of engineering.
Great picture

Anytime I look up I feel small Carmi...this is no exception! :) Great shot.

This is great. I was going to post an image almost identical to this one the other day....so I am going to post it later tonight. :) I really is funny how we view things similar! I am sure you will agree when you see it!

Thanks for your email also...it was so helpful and much appreciated. I will be emailing you back real soon!

I like this photo alot. It doesn't make me feel small in any way, but I'm not sure why. I don't think that architecture ever makes me feel small.

I love all of your photos. You seem to capture a different perspective. I also love that you think about what your grandfather must have been thinking about.

This is a fantastic image Carmi. And yes, it does make me feel quite small, and dizzy. I'm sure that that feeling would increase 10-fold if I were looking up in person. I've often wondered myself about the folks who build things like this. I would love to watch the progress sometime.

Oh, the image combined with your words, yes. Feeling "small" is an easy thing to do. If the idea you wanted to present with the photo is consistent with your words in the post, you've succeeded well. Other ideas I see? Audacity, confidence, and infinite possibility, among the standards, like strength. Gee, all that from a picture of a column. That's wild.

Of course I do. It reminds me of the stature of people who could design and build an edifice like that, without all the modern machinery and techniques we now have. I wouldn't know where to start!

I saw this posted yesterday but didn't have time to comment. I really like this one - especially when embiggened. I agree with Dana, it makes me feel rather small - almost child-like.

Okay, here's an unusual perspective - not only do I feel small when I look at this photo, but I feel as if the whole thing will slide down the column and crush me. So perhaps I feel a bit threatened by this photo? I know, weird.

Thanks for the different perspective. I love thought-provoking posts like this.

I actually feel a sense of longing... one of the things I admire about the Greeks and Romans... is that aesthetics were important to them... a little theme-happy, mind you, but important. As I travel though streets that have seen better days, I can't imagine the ones lined with independant buisness and auto parts stores and dry-cleaners EVER looking clean and nice and new. Possibly spiffy. But not for long. And I wish there was an ingrained sense of pride and asethetics in archetecture. Instead of just a utilitarian approach.

Wow. I bet you didn't think someone would be thinking about all that from that photo. ;)

It does make me feel really small and short. It is amazing what people can build, especially without hte aid of all the tools available these days.

It really is a great prespective of the column...good job!

I feel more discombobulated than anything else. If you hadn't said that way was up, I wouldn't have known. I would like to pretend that column is made of soft serve vanilla ice cream. But that is probably because I just woke up from an unexpected nap and am a little out of it. And maybe a little hungry for vanilla ice cream.

Making up for a Michele visit from yesterday.

I see there is anothr Pat. Anyway I'm the UK one here from Michele's. The photograph makes me feel a bit discombulaated because I assume it is a Doric column - fat and simple and round and the photograph disguises its roundness. Or am I wrong?
Just been reading the comm;ents and find it incredible that Carli has used the same word.

We have all these incredible old churches, castles and buildings here in the UK, and it's always worth while to take five minutes and think about construction without heavy plant.

As ever, right on the button, my wise friend.

Yes this definitely makes me feel small, but more than anything I cant get the vision out of my mind of you laying on the ground to take this and people's reactions LOL. Good for you. I love the story that goes with it again.

These things were built when craftsmen were REAL craftsmen and quality was paramount, none of this mass produced rubbish we have to put up with these days.

Beautiful picture. Yes, I do feel small when I look that that picture. I love these buildings that make us feel history and the passing of time reminding us that we are just a blip.

Michele sent me by the way:)

i think i always feel small standing next to big buildings or othr huge pieces of architecture.

columns are beautiful, though.... not the same as feeling small next to a skyscraper. the type of architecture in your photo is more awe-inducing.