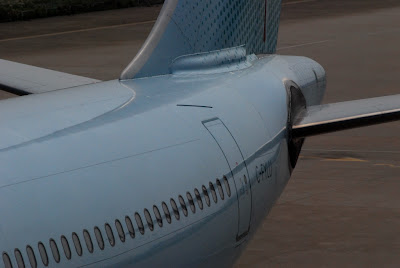 By now, my little addiction to all things aviation is pretty much an open secret. When I'm in airports, I often risk the wrath of security personnel by taking out a fairly conspicuous camera and pointing it at the lovely expensive machines parked just outside.

I thought about whether I should do this in a Chinese airport. After a recent trip to Boston, I read in the paper online about someone who was detained by Logan Airport security for taking pictures of aircraft. This individual was taking pictures a short walk from where I had taken this image that same afternoon. I shuddered as I thought that it could have been me.

So here I was in China a few months later, and the scene presented itself anew. The good angel said I should respect local rules and customs and keep the camera down. The bad angel said the aircraft waiting to take us home was just too photo-worthy to miss. I had never flown a 340 before, and its curves were just so...I don't know, European! In the end, the bad angel managed to get me to snap off a quick sequence while I waited in line for the last gate-level security check. Not one official so much as batted an eyelash, but the passengers in back of me seemed to find my in-terminal photography session to be quite entertaining.

I would probably err on the side of caution, Carmi, but I am glad you didn't. This is a great photo; one they ought to use in their ads! Very sensual curvature there!

I would TOTALLY shoot! :) I know....surprise, surprise! I love the curve here!

Being an aviation (at least the airplanes) who lives in the age of heightened security alert, which renders picture-taking all the more difficult, I would never pass an opportunity to satisfy my whims.

Ah! A fellow aviation nut...errr...enthusiast! I'd take the pictures as well, and I do whenever the occasion arises.

My neigbours must be bemused when they look over their deck and there I am with my 20x80 binoculars mounted on a Bogen tripod pointed high into the sky. Identifying the model and tail markings from high-flying jets is a fun way to pass some time on a warm summer evening. Cheers!

Beautiful shot Carmi. I'm not sure that I would have the nerve but like Kenju, I'm glad you did.

Travellers take photos. It wouldn't even occur to me not to, unless there were signs forbidding it.