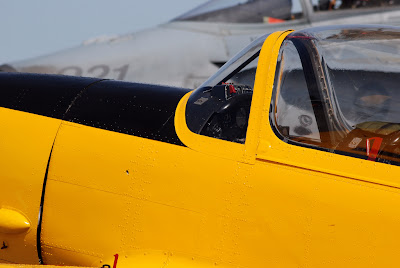 A Harvard and a Hornet
St. Thomas, Ontario, June 2007 [Click to enlarge]

The T-6 Harvard was a widely used trainer during the Second World War. This robust airframe was produced in massive numbers, and as a result remains a popular heritage aircraft today. Here in Canada, the Royal Canadian Air Force (RCAF) used them as well, and they were painted in an incredibly rich shade yellow. To this day, when they show up at an air show, everyone knows them.

I tried to capture the color of this fantastic bird, but was challenged by the insane crowds of people on the tarmac, and by the fact that it was the end of the day and my kids were ready to go home. I got lucky when I realized it was parked beside the CF-18 Hornet, Canada's front-line fighter aircraft (think Canadianized, three-generations-behind F/A-18 and you're not far off.) I composed tightly and shot very quickly before scooping up the munchkins and heading out to the shuttle bus.

Your turn: Color. Why does it affect us so deeply? Do you have a color story to share?

One more thing: A total of four Harvards participated in the aerial demonstrations that day. Whenever they took to the skies, they made a distinctive sound that rivalled the big jets for impact on the crowd. When he first heard them, our youngest son said they sounded somewhat flatulent. So without skipping a beat, he spent the rest of the day calling them "the farting planes." Certainly not what their designers had in mind, but sweet all the same. The life of a six-year-old...
Posted by carmilevy at 6/24/2007 10:53:00 PM

I'm trying to come up with a name for that kind of yellow.

I used to see colors when I hugged people. It doesn't seem to happen anymore.

So dubbed, "The farting planes!" Wonderful shot. I remember going to the air shows at NAS Moffet Field every summer before they closed the base down. It was the home of the P3 Orien submarine searchers. Because it was a Naval air station, the Blue Angels came every year... first with the A-4F and later switching to the F/A 18 Hornet.

I have so many memories of those days gone by.

Wow, those are really cool planes. Yellow is a very stimulating color, and it's interesting to think that it's prevalent in plant life but not in human physiology.

I love color...it can actually change my mood! That yellow plane is so vibrant...it reminds me of a sunflower yellow.

I am sure the day was incredibly fun!

Yes! Six-yesr-olds and body functions!!! You gotta love it! Farts are never funnier than through a child's perception!

Colors... my favorite colors are not consistent, but the references are: green like an American tennis hardcourt, yellow like a tennis ball, and blue like a clear sky with no wind.

Anna got it right - that IS sunflower yellow! I used to have a suit nearly that color and my boyfriend's sister made fun of me by saying it was the color that hunter's wear into the woods so they can be seen. :-/

Hey, I found you at Michele's. Beautiful pics

No doubt about it, if you don't want to really know how you look, smell, sound, etc., don't ask a kid. They're brutally honest much of the time.

Nice shot of the plane.

Years ago when I was around 21, Lovely Wife bought me a really nice, button-down collar, pink dress shirt. I LOVED that shirt. It fit perfectly and it was a soft and gentle shade of pink.

But, being from and living in Louisiana at the time, I loved wearing that shirt in public and when people would see me, you could see their minds gear up to mention a "man" not being supposed to wear pink, and then I'd see them immediately squash the words when they took into account my size. (I'm a really big guy.)

Over the years, I haven't had any more pink shirts, but my ipod has a pink cover that Lovely Wife gave me, and when people see it, they do the same thing as years ago when I wore my pink shirt. If the people know me well, they'll just go, "A PINK ipod?!"

I just say, yep, I LOVE pink, and leave them biting their tongues.

BTW, it would be great fun shooting together! :) Very cool indeed! Until then, good hearing from you Carmi and have a great week!

Carmi: I find the vivid colors of the Southwest and West to be invigorating. They are sort of an invitation to explore with one's imagination! This is what I find here on your site too!! Terrifics items!!!

love that yellow, and am smiling at the idea of farting planes :)
colour changes how I feel about many things, but nothing can be more beautiful or awe inspiring than the colours in nature, or the changing colours of the sea
am finally back , missed my daily visits here

It is a great shot, and captures the wonderful yellow colour of WWII RCAF and RAF training airplanes very well. As a small point, though, I don't think the airplane shown is a Harvard - the bubble type canopy and windscreen (rather than the older framed type used by the Harvard) is a clue. I believe it's actually a de Havilland Chipmunk, produced after the war. Chipmunks are commonly found at airshows performing along with the more powerful and sophisticated Harvards. They are often painted in the same yellow, and often parked next to each other between flights, which might have led to the confusion here. The smaller Chipmunk has an in-line engine and fixed landing gear, while the Harvard has a big radial engine, and tucks its wheels into the wings. A photo of a Chipmunk appears at:

None of these comments are meant to take away from the photo in any way - it's a very fine photo, but it's probably not a Harvard.