Snowbirds return to the skies 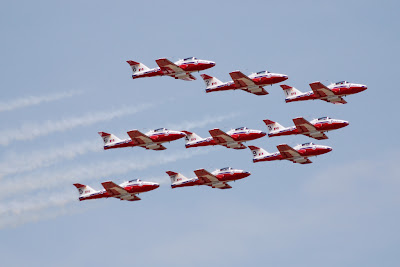 The Snowbirds are Canada's national precision flying team. The 431 Air Demonstration Squadron of the Canadian Armed Forces forms a crucial role in recruiting, and in representing Canada on the international stage. Like the U.S. Air Force Thunderbirds and the U.S. Navy Blue Angels, the pilots who fly these aircraft and the ground crew who maintain them represent the best of the best, and are always an inspiration for anyone who sees them.

The Snowbirds flight at the St. Thomas air show was a special one for a sad reason: it marked only the second public flight since the team lost a pilot in a training accident in Montana in May. Capt. Shawn McCaughey's #2 aircraft departed suddenly from the formation and plowed into the ground. The 31-year-old native of Candiac, Quebec, just south of Montreal, was the sixth Snowbird pilot to die since 1972. 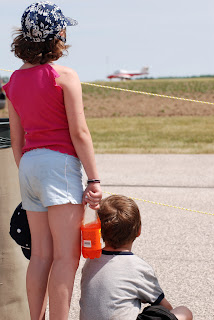 Our kids sat right behind the thin yellow rope facing the flight line and watched as the ground crew saw the nine aircraft off. At various points through the day, I tried to explain to them why our nation had such a team in the first place, and why it was important to have folks like this to inspire the rest of us. In the end, they simply needed to sit on the tarmac and watch these heroes go through their paces both on the ground and in the air. By that point in the afternoon, I didn't have to say a word: they just watched in awe.

I captured the top-most image during one of their many precision maneuvers. What sets the Snowbirds apart from other precision flying teams is their equipment. They do not fly front-line fighter aircraft that have gobs of power and the latest in digital fly-by-wire flight control systems. They fly the CT-114 Tutor (also known as the Canadair CL-41), a two-seat trainer aircraft whose performance is best characterized as modest.

These planes were designed and built before I was born, and their replacement has been a matter of hot debate - which tends to get hotter whenever there's an accident. Our traditionally cash-strapped military hasn't committed to replacing them anytime soon (see here for some late-breaking news that outlines how the Air Force was urged in 2003 to replace these planes ASAP, and has thus far done...nothing.) But when either disbanding the team or equipping them with less expensive propellor-driven aircraft was suggested, you could hear the opposition from one end of the country to the other. 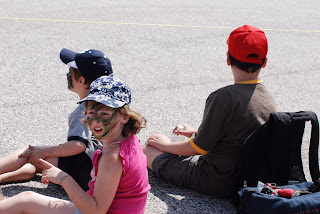 So while the debate rages, young soldiers who any parent would want his/her children to emulate continue to fly these relics of a bygone era, and they continue to make them dance in the sky in ways that make the rest of of us not just enjoy the performance, but feel it down to the base of our spine every time they fly past. It's as much an emotional journey as it is a physical one, one I'm glad my children got to experience as they sat on the hot asphalt beside the yellow rope.

Your turn: Iconic members of society. Please discuss who you think merits the term, what makes him/her/them iconic, why we watch, and what we can learn in the process.
Posted by carmilevy at 6/25/2007 09:28:00 PM

a "zing" as promised

I have a new blog

I love your stories about the airshow. What an experience for the kids. I hope they will remember this for many years.

My Dad used to fly the T-6 Texan which I believe is the same sort of plane as you showed yesterday. He was a training pilot.

I have often wanted to go to an airshow like this and get some up close shots, but so far have not found one.

Airshows are too loud for me to enjoy, except on TV. There have been a lot of crashes and deaths during airshows in the US over the last several years. Due to the cost of fuel and the above, I question why they are allowed to happen.

Your story reminds me of how I enjoyed attending the air shows at El Toro Marine Core Air Station in California. The biggest thrill for me was watching the Blue Angles, but everything about the show was great.

It's been years now, as the base is closed. I would love to take my kids to see an air show.

Fabulous! We have something over here the same called The Red Arrows. I always loved it as a kid when they would make patterns in the sky with red, white and blue smoke.

I've never gone to an airshow...usually too hot, and I don't like crowds. Once, however, when I spent some time in Tampa General, I was able to watch the planes flying out of MacDill Air Force Base.

The other evening at our Sweet Adelines rehearsal, one of the member's sons came to visit. He is home from Iraq for just a couple of weeks. When he was introduced, the group applauded and applauded. He was amazed at the reaction. No matter what people think of the involvement, they are proud of the men in uniform.

It's great that you took the time to take your children to the air show. I loved your son's comment in the previous post about the airplanes.

There's something to say for the old planes. When I lived in Haiti in the early 70's, the Haitian Airline was made up of DC-3's. What workhorses! They were wonderful. I never did mind flying on one of them.

I love this shot and the ones of the kids. I love how all the planes are lined up in airshows! It really is spectacular!

Personally, I think the men and women who fly on their service's precision teams like this are the next thing to being astronauts.

They are invariably shining examples of brains, determination, and are wonderful examples in a world with few heros.

When there are crashes, they will be spectacular and there will be all kinds of cameras pointed at them, and afterward the usual judgements and 20/20 hindsight, but overall, I believe the costs of the programs are worth it to inspire us and help give us confidence in our country's militaries.

Here's to many, many more years.

While there has been some public discussion about the urges to replace the Tutors (your 2003 recommendation reference), the planes are in far better shape than the Sea Kings and many newer machines our forces members fly.

The hubby, who has spent years working on these planes, hopes that the gov't doesn't rush out to replace them too soon. Mechanically, they are pretty sound and he believes that the show could never be the same if Canada switched to faster jets such as those flown by the UK and US demonstration teams. The Tutors are more manoeuverable and allow for far more intricate flying than their faster counterparts.

Also, while there have been a number of crashes over the years, very few are found to be due to mechanical defects or technical errors. As awful as may be to write so close to the recent accident, they're often the result of pilot error. These planes don't have auto-pilot or anti-collision systems modern planes do. Pilots must rely on their skills and reflexes (and those of their team mates) to perform.

Rather than quickly scrapping the planes, perhaps we should do a better job of training our pilots to fly without relying on modern technology to avert such tragedies in future.

Now, if you want to scrap the Sea Kings, I'll be the first to jump on that bandwagon. Well, perhaps I'll be father down the line as I know our techs are far more interested in getting them out of the skies than the Tutors.