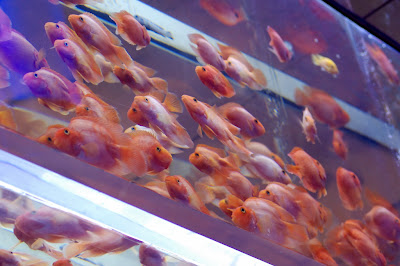 Remember the original Superman movie when the nasty guys were cast away from the planet Krypton? One of the enduring images from that film was when they were floating end-over-end through space, seemingly stuck inside a gigantic pane of glass. Or so it seemed: special effects were so primitive back then, and I was just a kid. So maybe my memories got fuzzed up in the process.

Wikipedia, keeper of all modern knowledge and then some, says it's something called the Phantom Zone. Um, OK.

Either way, the hotel I stayed in had this amazing aquarium in the rotunda where the conference was being held. It was composed of four enormous square glass pillars, all connected overhead by four similarly massive constructs of glass. Imagine the Arche de Triomphe, rendered completely in glass, reduced in size, then plunked down in the middle of a hotel lobby. Bad analogy, I know, but it was still the neatest aquarium I've ever seen.

This photo is a low-oblique view of one of the overhead segments. I am vertically challenged on the best of days, so this is as close as I could get to the fish when they decided to head up top. I really like what the angled glass did to the swimming creatures. I hope you do, too.

Your turn: The appeal of an aquarium. Please discuss.

One more thing: The Space Shuttle Atlantis is scheduled to fly tonight. I'm a space-head, and I get excited whenever humans leave the planet. Yesterday's entry, Divine Vessel, referred to the English translation of the name of China's Shenzhou manned space capsules. I thought it would be appropriate to slip in a bit of a Chinese-spacey reference. Go flight, and godspeed, Atlantis.
Posted by carmilevy at 6/08/2007 12:09:00 AM

This is a fantastic shot...
Fish Tanks... Well, I like our little one. It was meant to be a vase, but we have a Siamese Fighting Fish instead. Our little cat (Jasmine) like to go up, pat her paw to say hi, and then drinks from it!! She has never tried to scoop it out either, so to me, it is tranquility!!
BTW, have you ever submitted you pics of planes to Airliners.net? They are pretty damn good...
I am hoping to get a new camera (Cannon EOS 350D or 400D) soon...
Cheers and thanks for stopping by earlier...

Another great picture! I have come this time via Michele (though not officially. :)

I think the appeal of an aquarium, for me anyway, is that it just seems so peaceful and quiet. If you could just somehow experience it from the fish's point of view - floating, gliding through the water - ah it sounds so nice!

I LOVE watching fish in an aquarium! I could do it for hours. First, their movements are hypnotic and then the colors are unusually beautiful. There is an aquarium in our local PF Chang's restaurant that I could stand and watch for hours, but mr. kenju's patience with that is slim to none, and he usually drags me away.

Oops, Michele sent me this time.

I voted for you too. Hope I did it right.

Missed seeing you around the Cafe


My PAD and
Guelph Daily Photo

appeal of aquarium:
man's ancient desire to swim ( oh, that was fly, dang!)
does it have something to do with bathing suits?

Hey Carmi, sorry I haven't been around. Got bitten by the facebook bug and just surfaced for air last night lol. That picture is amazing.

OK. Two things to discuss today! :) First, Taiwan has this breed of fish (they are in the airport) that swim upside down. I am always mesmerized watching them. You can honestly not tell when they are upside down and when they are right side up. Very fun to watch.

Second, one of our most awesome shuttle experiences (and we lived in Florida, so we have a few) was when we lived in the Himalayas. We were looking in the sky at night and saw two dots moving away from each other. I thought it was odd, so I went online to see if there was something going on, and sure enough, the space shuttle had just separated from the space station. And we could see it all with the naked eye! SO cool. We became obsessed with watching the night sky then. ha!

Great pictures of the aquarium. I bet it was gorgeous.

I love all the colors from aquariums. I have a couple of friends that have salt water tanks....I cant keep my eyes off of them when I visit becuase of all the vivid hues.

Tat's a fabulous picture Carmi...This angle is, for me, part of what makes it so fabulous!
Shanghai had to be one of your AMAZING trips!

why do the french have an arch de triumph?
hehe

I don't know how the fish like it for their well-being but from what I can see and what you described, sounds interesting.

I always wanted a nice big fish tank like that, but then I realized how much maintenance is involved and ... forget it until I can pay someone to do it for us!

Here from Michele, officially, but unofficially from my reader.

We have fish and I love watching them. They're so random, sometimes floating, sometimes darting around and chasing each other. They swim around their plants and in and out of their castle - and I can't help but think how nice it must be at times to have that kind of life!

(Of course, I'd take mine over theirs, but it's fun to imagine sometimes!)