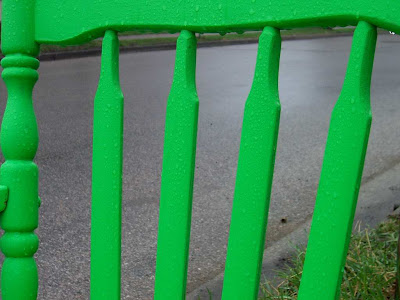 Streetscape, sitting down
London, ON, April 2007 [Click to enlarge]

Quick note before I continue: If you hang in till the end of this entry, you'll see a pretty neat media announcement. Seriously. I don't use the words "pretty" and "neat" together in a sentence unless it's really pretty. And really neat. OK, on with the show...

A couple of months back, I found myself cycling to my now-former workplace through a gradually worsening drizzle. I was in the home stretch, accelerating through the final kilometer so that I could avoid further soakage (there I go inventing words again.) The slick roads demanded my attention, as did the rain-speckled watch on my right wrist. It was 9:11 a.m. I was late. Oops.

A slash of unreal green suddenly appeared in the gray distance. As I approached, I saw a discarded wooden chair sitting by the roadside. It wasn't garbage day in this sector, but someone obviously couldn't wait to get rid of this broken relic.

I wondered whether or not to shoot it. I hardly had the time, and an ever-growing To Do list awaited me at my desk. But the bright green chair burned in my brain as it quickly slipped behind my right shoulder. Logic told me to keep turning the pedals, but emotion said it would bug me all morning if I didn't take the shot. I convinced myself that I could shoot quickly and be on my way in mere seconds, so I carefully squeezed the brakes and looped back.

In the end, I got to see an old street through a frame that wasn't there the previous day, and would likely, I thought, be gone by lunch. Sure enough, as I cycled home later that day, the chair was gone. I'm glad I took the chance.

Your turn: When time is short, do you stop and shoot? Why?

One more thing: I no longer commute to this office, because I no longer work there. Click here and here if you're just joining us and haven't heard about the big changes in my career over the last month or so.

OK, I lied, here's a second thing: If you live in Canada, you may want to tune into the Business News Network (BNN, formerly known as Report on Business Television) later today (Monday) at 7:05 p.m. ET. I'm being interviewed by Howard Green and will be talking about Apple as its Worldwide Developers Conference gets underway. This interview will mark my first major TV hit under my new role. I'll post a link to the interview once it's available on BNN's web site.
Posted by carmilevy at 6/11/2007 12:01:00 AM

I love this green colour! You did right!

Thanks for your visit to my blog. You are welcome there anytime.

Love the green chair Carmi. So vibrant! Can't wait to get the link from you of your interview. Have a great day!

Oh and to answer your question....OF COURSE I SHOOT....life is too short not too!

I always have my camera with me. I would stop and shoot. I have a 6 mo old daughter. I am always taking picture of my beautiful girl. One day down the road Im going to be glad I have thousands and thousands of pictures to look back on and remember all those things we did together.

Thanks for visiting my blog, stop back again soon.

literally stumbled upon your blog and now I am a bit smitten...
The photo is beautiful! quite an electric green...you have reiterated, to me, that it is vital to carry a camera at all times! you have such a fantastic way with words.

Yes, I would stop and shoot, just because, like you, it would have bugged me all day! It was worth the soakage!! :)

Hoorah for your interview!

I don't keep a camera with me typically. I did participate in a 14 Day Project however where I did. And yes, I'd stop everything to catch the perfect photo for that day.

Time is never too short to stop for a moment, to enjoy the moment, for a photo or a smile or whatever. So much is lost in the rush.

The chair sure doesn't look like trash from your photo... I would have taken both the shot and the chair!

WOW! That is REALLY GREEN!

Very cool, Carmi! And congrats on the media project too!!

The picture caught my attention as soon as your blog opened up. It's very stiking. I hope all went well with your interview! I always forget my camera, but if I have it with me, yes, I take the time to shoot.

I voted for your blog as best photography. My fave photos so far are this chair & the photo of the Airbus. I like the unusual prospective that is found in many of your photographs.

omg! you're a celebrity, wish that you could upload that interview here in your blog. and congratulations, as to the green chair, sometimes i do not stop, and then i somehow regret it.

Hey Carmi! Just doing some blog-surfing and thought I'd stop by and say hello. Hope the new job is going fabulously - no doubt it is! But still, I'd also imagine that these first couple of weeks are stressful, being the new guy and all that comes with that. Hang in there and enjoy!

Love how green this chair is! :)

Remember the song that Kermit the frog sang? "It's not easy being green..." That's what I think of when I see this chair. I like it!

I don't have a fancy camera, but I try to carry it with me most of the time as life is always handing us unique and lovely moments. But I also try to live those instances as well as shoot them.

Ive seen green and ive seen chairs and that my friend is one green chair!

Yes...that is an important point....living life as well as photographing it (or blogging it). :-)

It reminds me of a house I pass on my way home from work. It's a conservative little brick ranch, black shutters, white trim, green meatball shrubbery out front. And on the front porch, one of those cast iron setees,painted a lovely and vibrant shade of... purple.