Neon - not the Chrysler 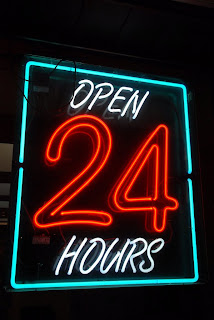 We never close
London, ON
September 2008

About this photo: We're exploring signs all week as part of the latest Thematic Photographic theme. If you aren't sure what I'm talking about (and no worries, most days I have no clue) head over here.

There's something uniquely American about neon lighting. Although it's most directly associated with a long-gone era defined by drive-ins, tail fins and clean-cut teenagers who didn't swear, there's something timeless about it, and designers and architects continue to use it extensively.

Which works for me, because few signs make me want to stand on a dark sidewalk and stare at them. These, however, do. They cast off such warm, welcoming light that it's hard to avoid letting your imagination wander. Neon doesn't just sit there; it tells a story and invites you to hang around long enough to appreciate it. Kudos to anyone who finds a tasteful way to integrate it into a facade.

I doubt a conventional plastic-covered fluorescent panel could ever elicit the same kind of emotional response.

You mean there was a time when American teenagers didn't swear?? Who knew?

I can't say I've ever had what I'd call a "memorable neon moment", but I agree with what you're saying. There is something about ionized inert gases trapped in carefully bent glass tubing that the cheaper plastic-on-fluorescent can't duplicate.

No neon in my latest offering, but you could make a case for a less inert gas.

You are standing outside the diner in the drizzling rain, the glow from the neon sign reflecting off the cold hard streets.
You have your trenchcoat buttoned and your fedora pulled down low.
You're on the lookout for a hot tomato that's on the lam from the law, but you're not the only one looking for her.
Suddenly you see a gorgeous blond walking your way, pointing a pair of 38's at you.
Then you noticed the gun.

tune in next week for
"Carmi-Private Eye"

I love the sight and SOUND of neon! Would love to be able to afford some beer signs for my basement! I have more Chicago signs, here they are -> http://ups-and-downs-with-anastasia.blogspot.com/2009/05/thematic-photographic-50-signs_22.html

I wonder if neon will become a thing of the past in the search for energy efficiency, as concerns over global warming increase!

Whenever I see neon, I think of the sign in the window of a little place in the fifties (we never went there - only drove by)
Appropriately it was the Rainbow Cafe

when i see neon signs i expect it's going to a beer ad in a liquor store window.

I haven't posted in a while but here is my contribution this week:

The place I enjoy seeing neon the most is New York City, where the medium is taken to the highest of arts! Netchick sent me this time, Carmi!

There's not many neon signs around here... and I can't think of anywhere open 24 hours either!

I can recall cool Neon signs that blinked on and off and used cursef writing to spell out a company name. It was cool! Many travel Route 66 from Chicago to California (even if it is disjointed). A Great post!

I've been very remiss about posting during your photographic thematic weeks, but this one surely caught my eye. As soon as I finish this comment, I shall hasten to post my own favorite neon sign.

Carmi there is something iconic about the neon sign. When I think of neon I think of Vegas and all the lights.

My most "memorable neon moment" was watching the History of Neon documentary in a hotel room in Winnipeg. Sadly, that was the most interesting part of my trip.