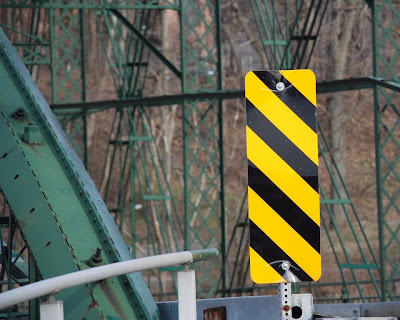 About this photo: It's a yellow week, all week long. To get the lowdown on the latest Thematic Photographic theme, please click here. We're taking yellow-themed submissions right through till Wednesday night.

The scene: Blackfriars Bridge. This wrought iron treasure sits on the eastern edge of the city's downtown area, carrying traffic as it has throughout its 134-year history. After picking my son up from a friend's house, we found ourselves with a bit of free time before we had to head home, so I suggested a slight detour and walkabout. Just because.

As soon as we got out of the car, I handed him the camera and told him to grab whatever he wanted. Carte blanche with his dad's camera: score! As we slowly approached the span, he methodically took it all in with his eyes, deciding what he did and did not want to capture. He noted how the perspectives continued to change as we approached, continued to make this bridge we had crossed so many times before look different than it ever had.

I deliberately walked steps behind him, resisting the urge to impose my own photographic will on him. This was his turn, and I was curious to see how he'd decide to proceed.

As it turned out, he did just fine. Left to his own devices, he told the story of this old structure in ways that wouldn't have occurred to me. Sure, he asked me questions along the way if he wasn't sure how something worked, and I did my best to answer them, quickly and thoroughly before reverting to my proud papa mode.

In the end, putting the camera into his hands and turning him loose opened my eyes as much as it opened his. And as he develops his own world view - with a camera, with whatever - I'll be perfectly happy to stand back and watch, ready to answer any questions he has along the way, but still content to resist the urge to grab the reins.

Wow... Your son is definitely getting more mature, now! Great that you gave him the space to find his own creativity and confidence! (sign of a super-great Dad!)

Congrats on an obviously talented son!

It's hard letting go, isn't it. But isn't that why we are raising them the way we are? I love the photo...it could be yours.

well done to your son. it's always amazing to see what a child's perspective is. my oldest daughter, who is 12, wants to be a photographer. she got a point n shoot for xmas. i told her she needs to just start taking photos of everything & anything. learn the functions of her camera. kinda doesn't work if you don't use it lol

As he gets closer to being a teenager, it is only a matter of time before the "do not enter" sign goes up on his bedroom door.

Zach has the magic touch.

My daughter Martha and I went to the local greenhouse one day in the dead of winter. For an hour, we went our separate ways with our cameras and then compared photos when we got into the car. Hers were spectacular and original. Mine didn't even compare. She's now itching for an upgrade!

Zach is lucky to have you to teach him, Carmi. Most of us flounder on our own, and some never develop an eye for it. Zach is well on his way, thanks to you.

Fantastic photo. What a great experience for the both of you. You're a great dad, Carmi!

My two are 13 and 11. I find that the letting go is, more than I expected, a happy experience. Bittersweet of course, but it's wonderful to see them growing up step by step. So far, anyway!

I had so much fun giving our old point and shoot to my 8 year old son. He was thrilled to have a real grownup camera, and I was thrilled at the chance to see the world through his eyes.

Now if we could just gently suggest that not all video clips have to be 8 hours long...

that is a great shot!
my youngest daughter is 14 and she surprises me with what she photographs, it's always a shot i would never think of taking.

This is ... this is awesome. I mean real pro stuff. If I hadn't seen the by-line on it, I would've thought it was yours.

But bigger than that, giving him the wheel is a big step for both of you. And what he made of the opportunity... well, it says as much about you as it does about him. Not just the photographic element -- impressive as that is -- but giving him a long lead... but not so long that he doesn't have the security of knowing you're there. That's a delicate balance to strike, but I'd say you've knocked it out of the park.

Congratulations. This is one of those milestones you'll remember in later years, especially if he goes on to do something in the photographic field. But even if he doesn't, this kind of two-way trust will take him a long way in whatever he does. It's a damned special thing, and you know it now. He may not figure it out until later in life, but believe me, he'll figure it out. Rock on Carmi, rock on.