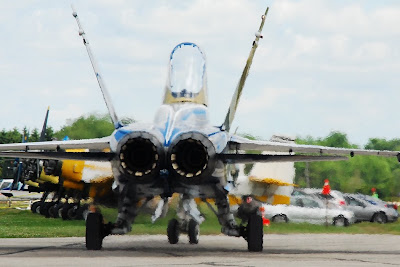 Jet exhaust can do serious damage to anyone who fails to pay sufficient attention on the ground. But if you're positioned just so, the optics are fantastic. It gives a dreamy quality to any scene, and makes me imagine, if only for a second, that there's an invisible hand painting the scene just for me. It's incredibly temporary, of course, because the effect is gone seconds after the aircraft either continues on its way or shuts down its engines.

But for that one fleeting moment, it serves as another example of how aviation serves up textures that simply don't appear anywhere else. Makes me want to live in one of the houses on the road opposite the airport entrance. That way, I could see scenes like this anytime I want.

About these photos: The topmost photo is of a Canadian Armed Forces CF-18 Hornet. This particular aircraft is part of the aerial demonstration team, and is painted in colours honouring the first century of flight. The second photo is of AT-6 Harvard WWII-era training aircraft bathed in the Hornet's exhaust as it headed out for a demo flight. I just love the old-meets-new spirit of this shot.

Finally, the F-86 Sabre, known as Hawk One, is seen returning from its demo flight. The Golden Hawks preceded the Snowbirds as Canada's national military precision flying team, and they flew the F-86, a frontline fighter still widely viewed as one of the most successful designs of the early jet era. This plane was rebuilt from basically nothing and is as close to a flying miracle as this country has ever seen. To learn more about this project, click here.

One more thing: (I'm starting to sound like Steve Jobs!) Thematic Photographic launches a new theme at 7:00 p.m. EDT tomorrow (Wednesday). What will that theme be? I'm glad you asked:

There's a static display of an F-86 at Cherry Point MCAS that I pass on the way to the beach. I've loved that plane since I was a kid. Over the years they've added other displays there, A Harrier "jump jet", and a few others, but the F86 still brings back fond memories for me. Nice to see there's still at least one of them flying.

Temporary art - there is a guy here in Christchurch who does the most amazing art by drawing in sand on the beach, only to have it washed away by the incoming tide. I've never seen it, I went out in the hopes of catching it one weekend but he wasn't there, although supposedly he does a hundred or so every year.

With three generations of pilots in the family so far I've got flying in my blood. I remember taking my grandfather to an old time airshow a few years before he died. He kept up a running commentary as each one went by - "I flew that one, and that one, and that one, and that one over there was a real piece of garbage, and..." What a treasure chest of memories he shared that day, and I was lucky enough to be there to share it.

I don't think I'm likely to be awake when the new TP post goes up so I'm putting my link here for tonight. It really straddles both this week and next week's themes in any case. I'll be back tomorrow to see how you've opened the theme.

From a Distance, the World Looks Blue and Green

In terms of temporary art... What surprises me is these street artists who do truely fantastic and wonderful peices of art on the pavement (sidewalk) only for it to get washed away with the rain or the street cleaner. The same goes for those who make brillant peices of art out of sand on the beach, only for them to get swept away with the tide. Wonderful work, but so very temporary!