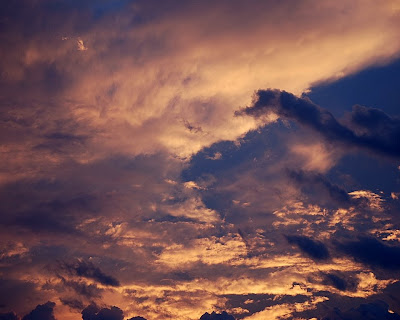 This just in: My appearance on CTV News Channel, originally scheduled for tonight, has been scrubbed (see here for original entry.) So many things have to come together in television that sometimes, things just don't work out. No worries: there will always be more interviews, as I've always got something to say. Thanks to you all for your great suggestions, and if you're north of the border, have a wonderful rest-of-Canada Day.

Over the past week, we've been sharing cloud-themed visions as part of our never-ending Thematic Photographic insanity (see launch image here, other photos here, here, here, here and here.) I chose this theme last week because I've been sticking my lens into the sky ever since I can remember, and every time I think I'm covering old territory, I manage to capture a scene completely unlike anything I've ever seen.

I know there's a lesson in there for all of us. Namely, there's no such thing as exhausted territory when it comes to photography (or anything else in life, for that matter.) Just because you may have taken a picture of Subject X at some point in the past doesn't mean you can't shoot the same subject and come home with a uniquely different shot. In fact, coaxing the new out of something familiar is a skill in and of itself.

To close out this week's theme, I wanted to share this photo as an example. Like so many other cloudy photos, I took it from my back yard. I had never seen this kind of light before that evening, and haven't seen it since. It makes me think this all has very little to do with photography.

Your turn: I hope this series has motivated you to pick the camera up more and doubt the integrity of the subject less. When in doubt, shoot it. What, then, will you be shooting next?
Posted by carmilevy at 7/01/2009 04:45:00 PM

Well I guess that's show biz? Great photo again. I so enjoyed this. I can't wait to see what's up for this week :) Aloha

The sky is one subject you can positively count on to give you a different look every time you shoot it. Which accounts -- in large part I feel sure -- for the popularity of Sky Watch Friday. But this? This is an uncommonly well painted sky. Lucky for us it happened in your 'hood. 'Cause nobody could've captured it better.

Funny you should mention light like you've never seen before. While it's not technically a TP entry (I have one of those up for the new theme though) there are still some clouds involved.

And light that was purely mythical.
New!Photographically Challenged #1: Who Needs a Meme When You've Got Light Like This?

Happy Canada Day Carmi! I love that shot! It's very rare that the sky turns that dusky shade of gold or sometimes even pink...it's very odd when it happens and I often think it's a sign that something strange is about to happen. I've a strange imagination.