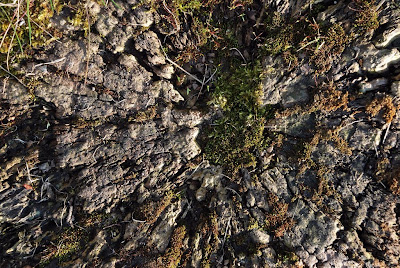 Nothing ever really ends. It may cease to exist as we know it, but eventually something else will rise in its place. Even the old tree trunk around the corner that we walk past every day has its own sense of continuity. The obviously large tree that once stood here and provided shade to the neighborhood is long gone. But the incubator of life at its base remains, and is arguably more vibrantly active now than it's ever been.

As I stood in a cemetery with my wife last week just before her cousin's funeral, I thought about how a mere few weeks ago we had visited him in the hospital, chatted with him in a delightfully sunny waiting room, heard the spirit in his voice as he shared how he had proven his doctors wrong by still being here after their even most optimistic prognoses. I took pictures that day because I feared we'd never see this cherished man again. And sadly I was right.

As I review the photos from this visit, now ephemeral pixels of data that are seemingly the only tangible pieces of him that we have left, I feel thankful that I got to know him and this part of my wife's family. His tree is indeed no longer standing, but I know the trunk he left behind is already teeming with potential, feeding on what he left behind.

What a fitting tribute to an obviously very special human being. I think perhaps the best way I ever heard it put was in a quote that I heard from dear friend JC, who heard it from a friend who heard and modified it slightly from the original source (sorry, but I forget just now who that was -- it's Googleable though).

"The only way around these things is through them. So if you bury your dead, bring a shovel, if you burn them warm to the fire. Look into whatever riddance you consign them to. Lend a hand, stand and weep or watch and wonder. But stay until it's done. Keep the names of your dead alive among your people. You get one father, one mother, one true love, one life and maybe a couple of good dogs. There is no easy way to do this. So do it right: weep, laugh, watch , pray, love, live, give thanks and praise; comfort, mend, honor and remember."

I couldn't put it one bit better, so I won't try.

A very nice tribute, Carmi. I'd like to be thought of as a tree in my family, with sheltering arms to caress and keep all my seedlings!

This morning, I was thinking about how much we are a part of nature and yet we often try to distance ourselves from the life around us...that we are different somehow from the trees and fauna which grow and bloom and then die. Their life cycle parallels our own. Maybe its the reality of that which makes us deny our place on earth.
I love your tribute...how you are honouring someone very special in your family by touching on nature. It reinforced my own thinking this morning and then stretched it farther.

I was also reminded of that book, The Giving Tree. Do you know that one Carmi? It is one of my favourites and I used to read it to my kids when they were younger. We all have the capacity to be a "giving tree..." and i believe we are in different ways. We give of ourselves to one another...sharing our essence, our personalities, our human beingness like the giving tree. And by so doing, we become part of other's life growth, other's tapestries.
I try to remember this when someone in my life dies....they continue to be an integral part of me. And because of that, they never leave me. It's an eternal connection beyond our short time on this earth.

What a fitting tribute to Sonny. He would have loved what you wrote. I was so glad we were able to see him last month.

I love your way with words and you too!