The distance that divides us 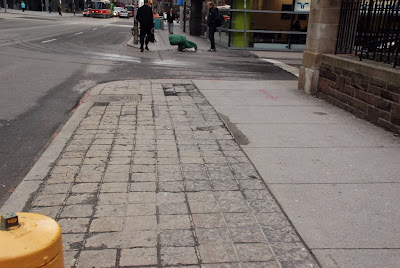 Kindness from afar
Toronto, ON, March 2009 [Click to enlarge]

A couple of months ago, I published this photo of a homeless man on a frigid Toronto street corner and a kind soul who somehow made his life a bit warmer, if only for a moment. As is often the case, I try to capture multiple perspectives of a given scene to ensure I don't return home empty-handed.

This particular photo was taken a few seconds earlier in that morning's sequence. I had just noticed this unfolding story, but had not yet worked up the courage to approach them more closely lest I interfere in the process. I used distance to give myself a bit of time to figure out what was going on, and how to best - and respectfully - record it.

I thought it would be appropriate to include it as part of this week's distant theme, as it reflects the distance of the big city - everyone else moving about uninterrupted and unaware - while a single man struggles to keep it all together. Thankfully he had an angel to watch out for him, someone willing to cut through the distance that usually divides us so.

I think that kind of thing happens all over the place. People just don't help anymore like they use to. I think a lot of this has to deal with all the lawsuits that have bogged down our court system. You look cross eyed now at someone, they sue. Also illness is another reason. There are deadly diseases out there and people just are afraid, even though they don't need to be.

I remember that post in a vague hazy kind of way. Wasn't it a "Caption This" prompt? Or am I thinking of another one...

I had a similar theme-within-a-theme yesterday, though not as dramatic. What I find encouraging about this instance though is that there was no ulterior motive, the Good Samaritan couldn't have known there was a camera-armed journalist/blogger lurking close by when it all began. It was just a moment of humanity that probably happens all the time, but goes unnoticed. (Was the other shot for "TP 49: Human" maybe? It would fit, for sure.)

But alas, I have no poignant moments of humanity to share today, just an idyllic lakeside scene... a distance from the crush of the world in a metaphoric sense and a grassy distance in a literal one.

I always feel better after seeing snippets like this. Makes me think that perhaps the world might survive after all