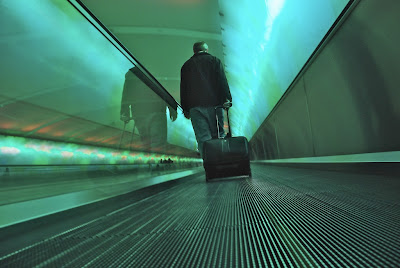 About this photo: Thematic explores single people this week. You're invited to do just that, by following your mouse here.

I don't know where this man was going, but I do know that shooting a low-angle shot on the moving sidewalk that runs between terminals at Detroit Metro Airport may not have been the most practical thing to do.
Then it dawned on me that I was in Detroit and should probably be putting the camera away altogether. But I had already taken the shot, so the damage was done.
Your turn: Where is this gentleman going? Why?
Posted by carmilevy at 4/14/2012 08:41:00 AM

By the way he's walking it looks like he's heading to an execution. Strong pic.

I like to use my backpack rather than those rolly thinghies...
~

Been there! Walked that! Never dared to get a camera out!

I love the shot, it makes me wonder where he's headed and for what reason. He doesn't look to be in a hurry wherever he's headed, so my best guess would not be enjoyment but rather home or business. I bet he's looking forward to retirement! :-)