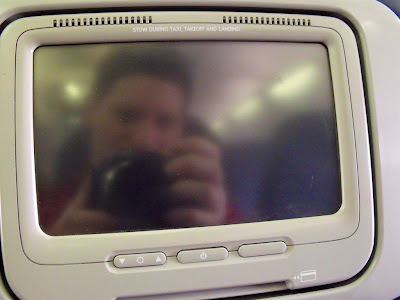 Screenful of solitary fun
Seven miles up over the eastern seaboard, December 2011

About this photo: Thematic's mirror, mirror week continues. Follow your mouse this way to take part.

You've got to feel for Air Canada. In between overlapping labour strife involving pilots, ground workers and the occasional flight diverted by drunken-then-fired-RIM-exec passengers, it's been a bad year for our national carrier. So the fact that the seatback screens on our flight weren't working wasn't enough for me to raise enough of a ruckus to merit an F-16 escort and an unscheduled night in the pokey fending off advances from my new best friend Bubba.
Still, it was a bit of a letdown, as I had been looking forward to anesthetizing myself with old episodes of The Ropers, The Littlest Hobo, and the Beachcombers. I always wanted to know what happened to Relic, after all.
So I played the fuzzy-self-portrait game, instead. And in doing so earned enough stares from strangers and flight attendants that I just had to steal a furtive glance out the window to ensure we hadn't picked up a missile-carrying Viper off our port wing.
Ah, the joys of commercial aviation in the post-9/11 era. How do you cope?
Posted by carmilevy at 4/06/2012 11:32:00 AM

This is more and more the case. I like it. It is less boring.

I just had to steal a furtive glance out the window to ensure we hadn't picked up a missile-carrying Viper off our port wing.

What, you weren't worried about that gremlin that was eating the wing?
~