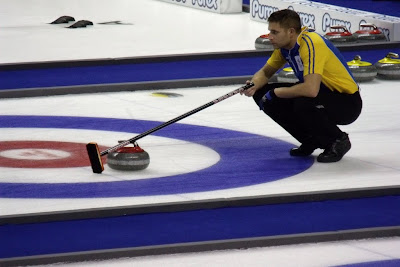 About this photo: We're celebrating single people of all stripes this week. Click here to find the Thematic entry that launched it all. No animals were harmed in the making of this week's theme.

Curling is a big deal in these parts, and we were pretty lucky to have the national championship, known as the Brier (oops, the Tim Hortons Brier, because nothing is immune from corporate sponsorship, but I digress) come to town last year.
We went, of course, because how often do you get to see ginormous rocks thrown with crazy precision down a meticulously maintained ice surface? And how often do you get to see a completely unique sport culture - no refs, honor system, seriously - unfurl right under your nose? It was a total scream to attend, and since then I've been itching to visit one of the numerous rinks that dot the landscape.
I grabbed this shot as one of the players helped his team line up its next shot. I could almost feel his concentration burn a hole in the rock, and the arena was so quiet we could almost hear the rest of his teammates discuss their options.
A nice change from the usual games that dominate the sports real, no?
Your turn: What's your favourite alternative sport? What makes it special?
Posted by carmilevy at 4/15/2012 01:12:00 PM

i don't think that this is a sport...

riding an old sit up-and-beg-cycle, with lovely skirt guards over the wheels and a wacking great wicker basket on the front...along the ( very) wide pavements while singing loudly at the top of my voice....is ceratinly as relaxing as the cross country runs of my youth!