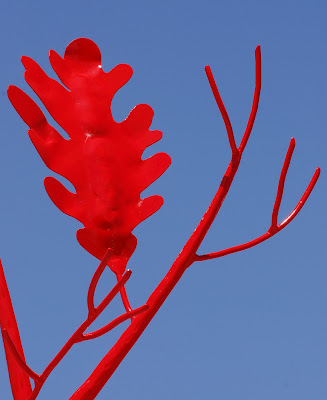 The fruit-wearing hat-wearers of the relentlessly milquetoast burg we now call home are all in a tizzy over the city's decision to install 15 metal tree sculptures in and around the downtown area. The installation, the brainchild of artist Bill Hodgson, has raised the ire of purists who say we ought to be planting real trees instead.

Quick time out: London is known as The Forest City. They take their trees pretty seriously here. In other cities, citizens write letters about sewage line reconstruction, tax rates and transit schedules. Here, they write about trees. They also duke it out in Facebook (click here for a little Carmi-funny. I'll wait...)

I've watched this little controversy with amusement. I love how wound up some folks can get over stuff that really isn't serious at all. I'd like to tap them on the shoulder and remind them that they really do lead charmed lives if this is the biggest issue on their plate. But I suspect they wouldn't appreciate my smarminess. So I have remained silent.

Until, that is, I saw one of the new trees, resplendent in bright red under a brilliantly clear blue sky, while walking across from the Covent Garden Market with my wife. I happened to have my camera with me, so I snapped this colorful, simple view.

wow, i LOVE that picture.

The Harbour of Ourselves said...

oh, yeah, gossip and blowing out of proportion is alive and kicking in small-town Guernsey, particularly the big fish in this small pond.....

Thanks for visiting my blog and for the kind comments.

Do people here blow things way out of proportion ?? Sometimes!

Personally, I thing the red tree looks great. Erie Pennsylvania, US people are known to also blow small things out of proportion though they probably would have liked the trees. We have Giant fish and frogs around from two separate discover Erie events. People loved them.
Our biggest out of proportion mess was a couple of women who lost their bed and breakfast after a local pastor went after them quite maliciously.

Absolutely they do! Raleigh is known as the City of Oaks. A well-known artist/metalsmith here made a huge copper acorn, which has been adopted as our symbol and is used at festivals and galas. You wouldn't believe how many people talked trash about that acorn!

The city council wanted to hire Jaume Plensa to produce some art installation for our newly refurbished downtown main street. I agree that his idea was weird, but you'd have thought he was Satan Incarnate, the way the yokels around here talked about it. The idea had to be scrapped because of it. Too bad.

Oh my goodness! I love the metal trees. I also love natural trees as well, and I truly believe that they can co-exist! As long as they are doing something to beautify the area, leave 'em be!

That is indeed a great photo. From the images I see so far of the trees, I like them. I'd love to see a shot with a whole bunch of them together. I don't see what all the fuss is about – I actually like the concept.

There's always something to complain about in Toronto...where to start? I dunno, I thought all the criticism of our 'Moose in the City' project wasn't entirely necessary. I actually think it was a good idea that sadly was not excecuted very well. (Of course, I am biased – I painted three of the moose! Heh).

That's nothing compared to the artwork a local artist has all over town. Imagine seeing a large sculpture of a horse with a dozen eyes shaped like a handgun, or a large flask with faces and eyeballs petruding out of it, or a face turning inside out (Wish I could show you this one).

It doesn't bother me, just most locals find them hideous.

that cracks me up that the trees have their own facebook page.

Living in a military town, or next to one...we get our fair share of anti-military. Cindy Sheehan and her group love to show their hate here. Makes me want to whack her up side her head with her sign.

love the picture... and love the idea...just feeding my imagination Carmi...:)

Love it Carmi! The colors are amazing. I have missed your blog so much! I see you have been very diligent with your posting. You are so good! :)

I love the red metal tree... and I'm really dying to see what 20 of them look like. :) Love the color contrast in that photo.
~S

I think that if you are going to spend unnaturally exorbitant amounts of money on ugly metal trees, the London Municple government either has a large surplus, or is made up of stupid people. These trees cost upwards of $20,000. This money could have gone towards more viable causes such as education, healthcare, or shelters. Altogether I think it is a unnecessary waste of money.

I don't think we are blowing things out of proportion.

I don't think any of us would care if they were free. It's the lack of nessecity and cost of it! The article from the London Free Press says, "The London Downtown Business Association is providing $200,000 for the trees". Really? You're going to spend that much money on pointless stupid metal things that most of our population hates when our roads are litterally collapsing under our feet? Maybe they're nice to look at for some people, but I'm pretty sure real trees are as well.

You all need to look at the bigger picture then to try and blame us for complaining.