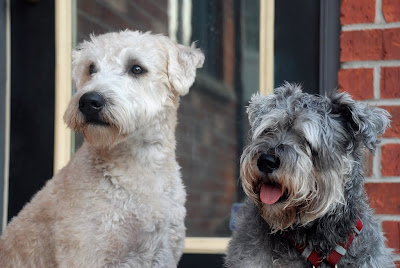 Dogs can have friends, too. This picture is Exhibit A. Frasier's first dog-friend was, and is, the handsome, beyond-sweet fella on the left, better known as Hudson.

If I'm being kind, Frasier is not the world's best behaved dog. He barks incessantly when he first sees strangers on the street, and he can never be off-leash outside because we just don't trust him not to run off at the first sign of a jackrabbit or squirrel.

But when he meets his buddy, everything changes. They play hard, they occasionally growl at each other because, well, they're dogs. Then they work it out and bound off in another direction. Eventually, they tire each other out, so they'll take a quick nap before heading back to the serious business of play.

Hudson somehow gets Frasier. Communicates with him as richly as he does whoever he meets. Connects with everyone around him in ways that betray the fact that he's covered in fur, walks on four legs and doesn't speak English. Reminds you why anyone's life would be better if it had a dog in it, and why every day would be better if it started and ended with some dog time.

I don't think I've ever met a dog I don't like, but there's something in these two that gets me. It's a joy to watch them create their own little dog social network, because it reminds me that doing the same on the human side really should be just as simple and pure.
Your turn: Why do best friends matter?
Posted by carmilevy at 3/06/2011 07:09:00 AM

Best friends matter just because...its unexplainable the feeling ... Best friends are there for u when u least expect them.. a shoulder to cry on, vent to, laugh with...they keep our sanity, they're our conscience...My grandma was my best friend when I was a kid, she was like a sister I never had...

best of all they come unconditional.

Oh I loved this and the picture is just wonderful!

Cute.
And they matter because - if they're a true friend- secrets stay safe in their hearts....and theirs stay safe with you.
I always need a good friend to lock things up for me it seems.....

Fantastic photo and I couldn't agree more, us humans sure could learn a lot from our dogs. They love unconditionally, are extremely good listeners, they run to greet you at the door happy to see you no matter how long they've been waiting. They know how to make you laugh and are always there for you when you cry. They're always willing to go for a walk without grumbling. My best friend never allows me to feel lonely, she's always here for me as I hope to be for her.

you touched my heart today, Carmi

It is fun to see dogs that become best friends. They look just like boys at play.

very sweet. Dog friends are awesome...so is dog love. A corgi is in love with my cocker, mostly because she's not much taller than him. He waits for her to go outside...then follows. very cute.

Oh, I just love this post. My dog has a few dog buddies of her own, and cat friends as well. I love watching them play almost as much as I love watching them snuggle up and snooze together. And that's one of the best things about best friends, isn't it? Having someone who is with you in the heady, fun times and the quiet, reflective times.

We just weren't meant to live life alone, having someone who totally gets you and loves you makes life so much richer.