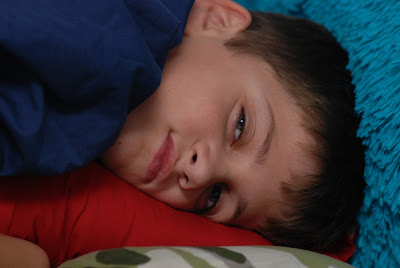 This is the last picture I took of our little man, Noah, before he fell asleep as a 10-year-old last night. As you can see, he wasn't too into the unplanned photo shoot, and drifted off into dreamland soon after I tucked the camera away and headed back downstairs.

As annoying as I clearly was - and as surely as I knew my Parent of the Year Award would disappear because of this - I didn't want to miss this moment in his life. Sure, it's an arbitrary one, determined by the powers-that-be who long ago decided that time would be measured with clocks and calendars. But he's been looking forward to it for weeks, talking about it every opportunity he can get. It's important to him. And if it's important to him, it's important to us, too. Hence the pic.

Just like his older brother and sister, he's in a relentless rush to grow up. He can't wait to grow taller, to be old enough to go places and do things that are already routine to his siblings. But as our youngest - our baby - there's a part of us that just doesn't want to let go of the little boy in him. He has such a good heart, a good soul, a help-others-before-himself way of living that we wish there were some way to ensure he holds onto that innate sweetness as he grows.

We were at the mall last week, and as we often do when we're out, my wife and I each grab a kid or two and head in opposite directions. Not that we don't want to be together - we do - but it helps us cover more ground in less time. So on this day, I had Noah. And as we headed toward our first destination, he put his hand in mine. Just like that. He held my hand for virtually the entire time we were on our own. I said nothing, not wanting to draw attention to how much it melted my heart that our son still wanted to hold his dad's hand.

Someday soon, it won't be so cool for him to hold my hand. And like so many other touchstones of his being a little boy, it'll slip into history, both his and ours. And we'll miss what it felt like. Soon after that, he'll be taller than me, with a deeper voice and a focus not so much on what goes on inside our house, but on what opportunities lie beyond.

It's unfolding exactly as it should for a kid who knows who he is, appreciates what he has, loves everyone around him and touches souls wherever he goes. He won't be a little boy for much longer, but those delicious insides will always help him stand out as he works his way through the world.

Happy birthday, little man. Know how much you're loved.

Really? I thought the post fit 'your style' of writing!. My wish for your son is that he stays true to himself, stay open to learning and experiencing new things in life... To ABSORB all...Enjoy life, stay active...pass the legacy forward..

Thats such a touching post and wonderfully woven ! Life is all about growing up, change, moving on, and giving way !

All the world is a stage. But this stage of growing up, is fantastic. Where you both want them to grow yet, want those melting moments to linger for longer !

Happy Birthday to Noah! Such a great age ... I always thought the under 12 crowd were the best years!

Sorry I am late with the Happy Birthdayness. Noah. I wish you a great life. May your troubles be minimum and your joys tremendous.