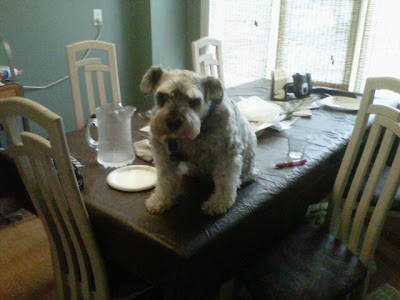 This is where my wife found the dog when she came home from school one fine afternoon. He's quite the vertical operator, scaling the table if he finds a chair even slightly out of place. He's done this more often than we care to admit. Silly boy, however, is unable to get himself down once he gets up there. So we're not entirely sure how long he spent up there before Debbie rescued him.

Well, she snagged this picture on her BlackBerry before she rescued him. Posterity rules, y'know.

Crazy puppy turns five today. He's technically not a puppy, but we don't let that sway us. He's our puppy. Always was and always will be. We hover over him with worry - the diabetes and more recent infection have turned him into the canine equivalent of a needle-stuck junkie - but he's still that crazy ball of fur we rescued all those years ago. It was really only a little over four years, mind you, but it seems like he's been a part of us forever.

I'd be lying if I said I'm not worried about what the future holds for him. He fights the insulin injections like a championship wrestler, his sugar levels are still wonky and rustling him from a deep sleep can be a more than a little challenging - and frightening - some days. I don't know how many more birthdays he has in him. But whatever days we're given, we'll treasure them.

I'm heartened by how the kids have been since he first got sick. They play with him just as they always have. And instead of merely paying lip service to the feeding-and-walking routine, they've stepped up. Noah takes him out back. Zach feeds him and helps distract him at injection time. Dahlia makes sure he gets enough water and playtime. If they harbor any fears about their little buddy, they don't show it.

In so many respects, dogs echo humans. There are no guarantees how many birthdays they - or we - receive. All we can do is squeeze the most goodness out of the ones we've been given. Looking at our puppy in the middle of my remarkable family tonight, it's clear we're all doing just that.

By trying to make the most of it.. Keeping memories of what I've done.. Your post almost had me bawling... I can imagine doing the same.. Hovering, not sleeping and watching every move and waiting for the next sound... He's a cutie for sure... Poor baby, I can imagine his fear of needles...

You know I always call Brady, our puppy, our youngest baby. We have 2 teenage boys who will always be my babies but Brady ... well no one is quite as happy when I come home as he is. We do what we have to do for our family and we always pull together. That's what family's about.

I love that picture of him. Of course before I took him down from the table (in true Carmi fashion:D)I had to take a picture.

I adore that cuddly dude and more than just a little bit worried about him. But no matter what the future holds our life has been enriched by the fur ball.

The best thing about your blog is the unravelling of profound messages so warped in everyday life !

This one was not only touching, but also deeply real

A great shot and I love the story behind it. I'm sorry to hear he's got wonky sugar levels... Our pets are always our babies :)

First of all, I had to laugh when I read that he could not get down by himself! Bless his heart!

Making the most out of everyday is what I try to do - I spend time with my Killian (cat - 15 years old); make sure I'm in contact with family and friends...and just live a peaceful life...