Look behind the glass curtain 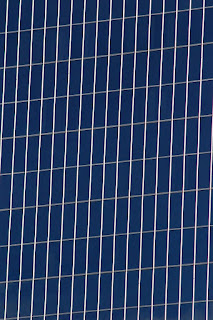 About this photo: Thematic Photographic celebrates all things vertical this week. You can, too, by clicking here and adding your own pic to the fray. It won't hurt. Much.

As I stare at some ornate old building, I often find myself subconsciously musing that something like this just wouldn't get built today. Inevitably, some bean counter would seek out the gargoyles, flourishes, cornices and columns and deem them absolute wastes of money. Said bean boy would probably be right, as the world can easily live without another stone replica of a cherubic angel keeping guard over pedestrians too bored to ever look up.

Eventually, the trim-the-fat movement efficiently excises every last cherub from our midst, leaving us with flat surfaces like the one you see here. They're often completely devoid of variation, ruthlessly repetitive themes that hardly seem human at all.

But are they ugly? I'm not entirely sure they are. Just because it's easy to find something to love when you're staring at a cherub doesn't mean a less feature-filled sight - like this glass curtain building envelope - is any less capable of delivering optical joy.

Modern architecture that's seemingly devoid of extraneous features isn't worse, nor is is better. It's just different, and it's up to us to find that joy no matter what we're looking at.

While we're all chewing on this literary-photographic piece of obtuseness, I'll be zoom-zooming my rented Mazda Mazda3 (the car so nice they named it twice) through the hills of New York State on my way home. I like this direction much better than the other one precisely because of what awaits on the other side. And when I get there? Not a gargoyle in sight.

Well, clean lines and repetitiveness! lol... The cherubs, or gargoyles to me represent history... The person who designed the building w/the cherubs, doric columns, dental molding- is leaving a bit of history for everyone to see.. U ever notice the expressions on gargoyles? there are loads of them in Paris (in that famous garden, which I can't remember). In fact my husband took a pic of me in front of one and said it reflected my mood! yep I was angry at him....:-)

Hmm what do I see... looking closely... Well the rightmost (at the top) metal framework bar seems to have two chips along the full length of the bar. One in the third visible section, and one in the ninth visible section, from the top.

All joking aside though, this seems to be along the same lines as "Beauty lies in the eyes of the beholder". I for one do like the look of modern buildings, the clean, minimalistic look is very neat and organized. I find it reflects the views of our modern society, ruthlessly efficient.

Rutglessly efficient businesses are the only ones that that can make it in this day and age. There is less and less room for the old mom-n-pop shops, akin to the gargoyles and unneccessary frivolousness of the architecture of days gone by.

This is sad but there is a silver lining to even the blackest of clouds. With increasing efficiencies incorporated in almost every facet of our modern lives, we are advancing as a civilization faster than ever.

It could even be a picture of a mesh fence.

We've just returned from London, where there's quite a lot of strange modern architecture, like the famous "Gherkin" and the "Shard" that is being built right now. It's always amazing to see the contrast between the old and the new, but in London, where the old can be very old, it's particularly unsettling. I have a picture of the Gherkin here:
http://doves2day.blogspot.com/2011/07/travel-lessons.html

and I'm planning to post some photos of the "Shard" rising up behind the Tower of London.

Chucks, I looked really close, and squinted until my eyes almost hurt, almost, well not really but to me it's still just appears more like a filter for a furnace....but a pretty colored one at that! I agree most every building created has it's purpose, but I'm not so much a fan of that style, they are pretty enough, but they just don't make me stop and turn around and say ...wait a minute! You though have given this building quite the glory in on simple photo!!

...and there was me thinking it was a metal fence against a blue sky!