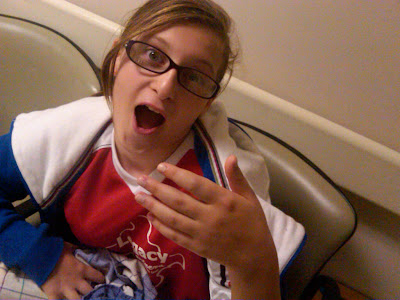 When our daughter, Dahlia, stepped forward to play goalie for her soccer team last night, it was hardly a surprise. She's a gamer, one who looks out for others and never shies away from doing her part. She knew that few players ever volunteer for this typically thankless position, where opposing players rush headlong toward the goalie, who then gets blamed if the ball sneaks past. She knew her team needed her, so she raised her hand when coach asked.

And she dove into the role with gusto, making save after save through much of the first half, ruling her area with a confidence that defied the fact that this is her first-ever year playing soccer. My wife and watched from the sidelines with a curious mixture of pride and fear. Our tough little girl was taking names on the field, but my wife counted the minutes until the shift was over, worried she'd get hurt.

Turns out my wife is prescient. In what seemed like no time at all, an all-hands rush on the goal ended with our daughter lying motionless on the grass, her teammates gathering around her in silence, her coaches running from the sidelines.

I broke parent-spectator protocol and dashed onto the field. Someone had accidentally trampled her hand. The swelling was already visible, and she couldn't move her index finger. After conferring with her coaches, who got ice on her in record time and managed the moment like the kind-hearted masters they are, we decided a trip to the ER was in order, just to make sure.

Long story short, she didn't break anything, but she did hyperextend the finger, which caused the cartilage to displace a bit. To help it heal, she'll be in a 45-degree splint for the next two weeks. Typically Dahlia, she was a trooper, cracking jokes and charming every doctor and nurse as we moved from stage to stage through the hospital. Her doctor heartily laughed as she confirmed her strategy to milk this thing for all it's worth with her two brothers.

This being 2011, I tweeted from my BlackBerry, which auto-updated my Facebook status. My wife texted to friends and family. Later, Dahlia's Facebook page filled with the sweetest messages from her team mates and coaches, everyone hoping she's ok, everyone wanting her to come back and assume her position in goal, everyone missing her already.

No parent ever wants his/her child to experience pain or uncertainty, but virtually the only certainty in parenthood is that these kinds of things will happen from time to time. And we've always taught our kids to find the silver lining in whatever challenges life throws at them. Dog gets sick? Hug him closer and more often to squeeze more love out of whatever time we've got with him. Get hurt on the field? Use it as an opportunity to make good friends even better ones, and to spend an adventurous night in the hospital with your parents. You can't control what happens to you, but you sure can control how you respond to it. We've always known that she gets it. Last night confirmed it that much more.

She's already informed us she intends to get back into goal as soon as her finger heals. And she'll be at practice next week, too, because she loves the game and loves playing it with her team mates.

As I watched our daughter shake off the stress of last night like a duck would shed a bit of water, I realized she has whatever she needs to handle whatever stuff - soccer or other - that life decides to toss her way in the years to come. I want to be more like her when I grow up.

Your turn: Got any thoughts or words for Dahlia?

One more thing: This experience easily qualifies in the "rough" category, which coincidentally happens to be this week's Thematic theme. To share your own, please click here.
Posted by carmilevy at 7/01/2011 10:44:00 AM

Dahlia: YOU GO GIRL!... I bet you got your tenacity from your parents... Not singling one over the other.. Just saying I think you have two special people who have raised u to reach whatever you desire... Carmi, from what I've read about what you write about your kids, your kids are resilient and the fact that u and your better half have a stick-to-edness to family shows in your kids... Your kids will grow up to be strong beings, I can see both going so far in whatever goals they attempt.

Good on her for stepping up. Glad she is OK too! :)

Dahlia: What a great attitude you have about life and struggles! This mindset will take you wherever your heart leads and to much happiness. Feel better.. oh, and please do "milk it for all its worth" with your brothers. ;)

Carmi... it NEVER gets any easier for the parents to see. It actually gets a bit worse (not to scare you or anything), because they grow up and move across the country and then get sick or injured and have to take care of it without you. Fortunately, with her attitude and common sense... she will be OK!

I have words for you Carmi. YOU ARE A GREAT DAD!!! I want you for my dad when I grow younger! And for Dahlia, thank you for being. We need people like you in our world for all our futures! Take care you two.

I don't think there is anything worth doing that doesn't involve risk. Sometimes it's physical, sometimes mental, and sometimes emotional but it seems risk is a constant.

It was brave of you to step to a job that most don't want when your team needed you. But even more importantly, when things went wrong to handle it with such grace.

This is an attitude that will take you far in whatever you choose to do with your life.

I hope you heal quickly and yeah, milk that for all it's worth honey!

Congrats to your daughter (and to you and your wife, Carmi...you're obviously doing something right!).
~

Our soccer goalie says to tell her to hang in there, that it will pass.

As his long-suffering soccer mom (the season here runs for ELEVEN months, with practices 3-4 days a week and games EVERY FREAKING WEEKEND, but no, I'm not bitter. Much.) I'll add that any game that doesn't end in the emergency room I count as a win ;). Being a goalie is tough, both physically and emotionally. Stepping up to it shows that Dahlia's made of some pretty great stuff. Of course looking at her parents that's not exactly a surprise now, is it?

Dahlia has clearly got heaps of courage, dedication, heart - and what in this country would be called mana.
Wonder where she gets it all from?? Let me think - her genes, her environment, her upbringing... ;)

Now I could tell you many tales of ER visits, broken bones, neck braces etc etc. My daughter rode competitively - showjumping, crosscountry - for many years,starting at age 10. She had a very large file at the local hospital!

This is a beautiful post and with every parental ounce in me - I could feel your emotions as you went through that experience. You are so right - we can't control what happens to us ....but we can definitely control our attitude and how we respond to it.

Btw - I love how you titled this post. I hope your daughter reads it. :)

Best wishes to her ! going by what you describe, I am sure she is going to bounce back, much like the duck that shakes off water and yet takes to it for swimming and living !

Such life experiences make her future ! And with parents like you, we can only say that hopes for a better planet in the future stands a better chance !

What an awesome post. She's a trooper indeed! She reminds me of Christine Sinclair, captain of Canada's women soccer team. You and your wife are true examples of what great parents should be.

I want to be just like Dahlia when I grow up too. Hope she is back in the net soon. Happy (belated) Canada Day!

Yay for Dahlia. Hope she is well soon.

my daughter chose soccer for her kids because she thought it would be safer. ouch!